Looking for a job?


We are currently expanding our ventures and require more manpower in terms of therapists and trainers.
We are open to any age, gender or race. If you are interested please contact Mr Tim Low at the given contact details.

We will be conducting free course preview on every Monday, Thursday, Saturday and Sunday from 6 p.m. - 8 p.m.

For those who have graduated with flying colors, we are proud to announce that we are offering a program called SET(Self Employment Training) where if you work with us and do 100 hours worth of massage in 2 months, you will be given your money back 100%. top
Posted by Tim Bodycare Training Centre at 12:16 AM 5 comments: 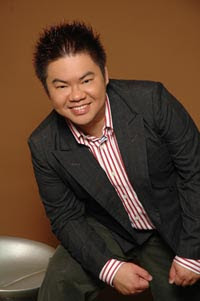 Tim Bodycare is the brainchild of Tim Low who started the company five years ago and has been the pioneer in delivering quality massage therapist in nationwide and international alike. As a licensed therapist coming from the Royal School of Medical & Massage in Thailand, he utilized his IT background, business knowledge(Tim has an MBA in Human Resource from Preston University), contact networks and multiple massage disciplines to come up what is known as Tim Bodycare. Already his company is vastly growing doubling revenue annually and having already successfully opened up 5 branches, plus more to be opened soon.

Being a classic geek, he spent long hours in front of the computer due to his work in the IT line for nearly seven years before deciding that he needed his life back.

“I was working only with computers, and one day, I discovered that I had very few friends. And from that point onwards, I decided that I want to touch people,” said the 30-year-old bachelor.

Now, don't get him wrong about “touching someone”, for that is the philosophical side of Low speaking. For this Kuala Lumpur-born entrepreneur, to touch strictly means providing a decent and proper massage service to his fellow Malaysians.

Arguably one of Malaysia 's most skilled masseurs, Low, who learned his craft in Thailand , revealed that his shift from IT to being a masseur is not as dramatic as it sounds.

“I was a geek with not much of a life after work,'' he said about how he lived seven years ago, when he joined Utusan Jaring (an Internet related company) upon graduating in IT and marketing from Australia's Murdoch University.

Low's achievements in the IT field are impeccable. As a marketing executive with Utusan Jaring, he designed a software programme that enabled the company to increase its debt collection nearly nine fold. By 1999, he felt that he needed a new challenge, and left the company (and in the mean time, managed to finish his masters degree in human resources from Preston University).

He then took a short holiday to ponder his next move, before finally joining Maxis Communications in 2000 as an assistant manager for product development. The good salary offered commensurated with an equally demanding work environment, where staying until 8pm or 9pm was the norm.

Low was then asked by pdx.com, which supplied billing solutions to Maxis as well as other corporations, to join them. With the relatively fixed working hours, he found that he was more in control of what he could do after work, and that was when he came up with an innovative idea called Doctor PC, a (now defunct) service offering house calls to fix people's personal computers.

Doctor PC folded due to a wrong business decision made by Low, who said that he had overstocked on a kind of modem that was overtaken by a speedier model rather quickly.

“Solving IT problems comes quite naturally to me. Just a few keystrokes and that is it. But I thought to myself, I am always facing the computer and don't have much of an opportunity to face human beings and to interact with them. What if I had an opportunity to touch people?

“By touch, I mean to help people solve their problems, and to help them move on. I think I am a caring and gentle person. But working in the IT line for so long actually numbed my feelings towards people. When I tried to interact, I felt that strange distance. I told myself that I must break through this barrier, and to ‘shift' my being.

“And that was how I decided that I was going ‘touch' people by being their problem solver.”

Incidentally, studying IT was never Low's intention in the first place; it was his parents' idea.

“Actually, their first choice was for me to study property valuation (his dad is a retired real estate developer). But then, they thought that IT wasn't too bad either,” said this third child among four siblings.

“I am pretty good at what I did, but then, just because you are good at something does not mean that you have to stick to it. To grow, you have to empty yourself so that new information and skills can go inside of you. It is like a full teacup, which must first be emptied before more can be poured into it.”

Low's interest in massage was actually not a sudden thing; his interest in that field started to take root while he was in his first job. “During the short break that I gave myself after leaving Utusan Jaring, I went to Thailand to learn traditional massage.”

Low's kind of massage is not learned in any dingy massage parlor in an alley, but from the world famous Royal Thailand School of Massage in Bangkok.

According to him, those with the skills to provide a massage enjoy a few plus factors.

“We can give pleasure, provide relief for people, make new friends, improve our romantic lives, and not the least, have a means of generating income. Who knows, it can also be a chance for me to meet my life partner!'' he said with a smile.

On the perception that he has “wasted” his talent in IT by becoming a masseur, Low said that it is not really the case. “I have set up a website for my business (www.massage.com.my) and have a computerized database of my clients. You see, my knowledge has not been wasted.”

On his parents' reaction when they found out that he is giving up a job that paid well in excess of RM5,000 a month to be a masseur, Low has few words: “They think I've gone crazy.”

But after a while, this filial son managed to convince his parents that operating a massage centre can actually pay just as well as his last job – in fact, Low's current income already exceeds his last drawn pay.

“And my sisters are very supportive of my decision. They recognized that I had to be free to pursue what I really love, and are now actually contemplating whether my venture has any investment potential for them,” he chuckles.

His parents cautioned their son to do only the “decent” kind of business. “They said that as long as there is no hanky panky of any kind, it should be okay by them.”

On the monetary side, Low has every intention of becoming financially free as soon as possible, which means that he will still be working pretty hard for the time being. But in addition to working hard, he also works smart – by training others to be masseurs under him. Furthermore, he intends to open another four massage centers this year, in addition to the one currently running in Section 8 of Petaling Jaya, Selangor.

Called Tim Body Care Training Centre, Low's massage centre doubles up as a school for anyone who wishes to learn the craft in a curriculum that also includes reflexology. Low is an accredited massage trainer under the Government-funded Human Resource Development scheme.

“My idea of a simple life is to be free to do what I really like, which is to bring joy to my parents, to travel, to provide jobs for others, and to serve the community, and I hope to achieve all these in a responsible manner. When you make a choice to do something that you really like, then it is called freedom. Really, I do intend to retire by 40.”

And by the way, Low's social life had improved since he left the IT line.

“Err, yes, I am currently going out with someone, but the relationship has yet to develop to a very deep level,'' he said with a small smile.
Posted by Tim Bodycare Training Centre at 12:15 AM 3 comments:

This is our new blog and hope you all can get more and learn from us and please don't be shy to call us or to visit our web site at www.massage.com.my.

or u can email us massage@massage.com.my.

Posted by Tim Bodycare Training Centre at 12:10 AM 2 comments: